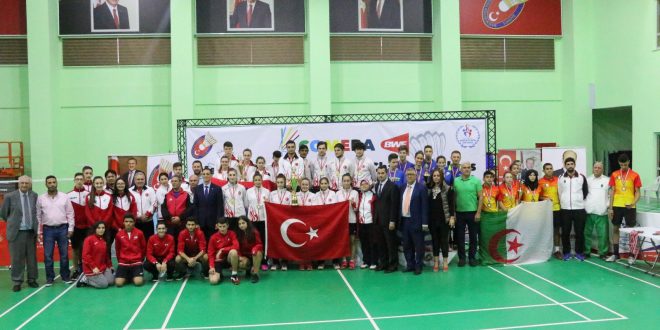 COMEBA has just organised another successful edition of the two captioned events which targeted junior players born in 2000 or later, together with their respective coaches.

The two events took place consecutively in Ankara and were well organised by the Turkish Badminton Federation at its recently inaugurated Training Centre, under the leadership of its President Murat Ozmekik.

The Training Camp featured ten sessions each lasting three hours and was attended by thirty-eight players; the Camp was ably conducted by the Indonesian coach Endra Mulyajaya. It provided the attendees with the latest technical and tactical updates of the game, both in Singles as well as in Doubles play.

The “Mediterranean Cup” consisted of separate Team and Individual tournaments. The Individual competition comprised all five categories (Singles and Doubles). The outcome of both events reflected the technical supremacy of the participating Turkish players.

In the Individual Event, the Men’s Singles title was won by Yazgan CALISIR (Turkey) who defeated team mate Berkay CICEN in the final.

The Women’s Singles title was won by Zehra ERDEM (Turkey) who prevailed over team mate Naime YILMAZ in the respective final.

The titles of the Doubles categories were won as follows:

The runners-Up in the Doubles categories were:

The COMEBA President Murat Ozmekik expressed the Confederation’s satisfaction at the enthusiastic and sportive participation by all as well as for the high standard of play as the participants gave their very best when matching their talents with those of their opponents on court.

While congratulating the Turkish players for their achievements, he augured that the other participants return to their respective countries with pleasant and positive thoughts about their overall experience as well as about the host country.