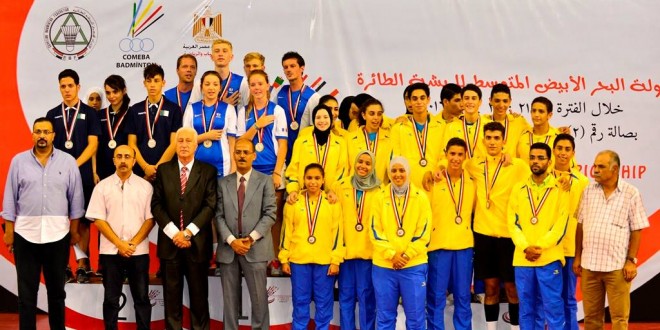 COMEBA continues with its constant efforts targeting the further development of Badminton among its members in the Mediterranean region; and this in line with the objectives clearly outlined in its Statute.

It has recently organized another edition of its Mediterranean Championship; this was followed by a Training Camp for all the participating players and their coaches.

Both events took place in Cairo (Egypt) and were intended for players born in 1999 or later; they were organized by the Egyptian Badminton Federation under the leadership of its President, Dr Ali Hasaballah.

The Team Tournament saw the participation of the following five squads:

The tournament was won by France whose team remained undefeated in all its four matches. Algeria took second place, winning three matches and losing only to France; Egypt ‘A’ placed third.

In the Individual Event, the Men’s Singles competition was won by Mohamed Mostafa Kamal (Egypt); in the final, which was a three-set thriller, he prevailed over Max Lamblot (France) with the following scores: 21-17 / 13-17 / 21-18.

The Women’s Singles title was taken by Ophelia Casier (France) who defeated Halla Bouksani (Algeria) in two straight sets, winning the final with the following scores: 21-16 / 21-15.

The competition for the three Doubles’ titles saw the predominance of the Egyptian players; these were the respective final placings:

While thanking Dr Ali Hasaballah and the Egyptian Badminton Federation for the organization of the two events, COMEBA expresses its pleasure and satisfaction at yet another successful edition of its Mediterranean Championship, as well as of the subsequent Training Camp. It is confident that the two events reached their objective: namely, the further development of the participating players and coaches as well as a higher profile for Badminton in the Mediterranean region.